Condoms can provide protection from STDs and pregnancy but they aren’t 100%. Here are twelve mistakes you might be unintentionally making that increase your risks of contracting something unpleasant and siring a child.

#1 THINKING CONDOMS WILL STOP ANYTHING

While condoms boost a 98 percent success rate for preventing pregnancy, that is only if they are used perfectly correct. 18 out of 100 women become pregnant when using condoms, so it is recommended to use condoms yourself and suggest the Pill or an IUD for your lady.

In addition, while condoms are helpful in preventing STDs and STIs like gonorrhea, HIV, and syphilis, they have no effect on others such as HPV and herpes, because these are passed through skin-to-skin contact and not bodily fluids.

Whether you are getting a condom that’s too big or too small, when you buy the incorrect size, you are negating the contraceptive benefits of the condom. A snug-fitting condom will give maximum benefits. You and your partner’s safety is important. Don’t overestimate or underestimate your size. 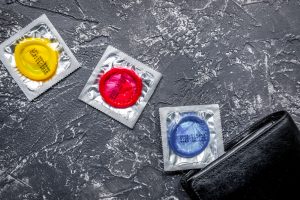 Condoms that are stored in wallets are no longer any good. The heat from your body as you sit on the condom removes the protective benefits. Throw these microwaved condoms out and get new ones.

#4 PUTTING A CONDOM ON INSIDE OUT

The designers of condoms made this an easy-to-spot mistake because when you put a condom on incorrectly it won’t unroll easily down the length of your penis. You will have to force it. When on the right side, the condom effortlessly unrolls. This isn’t a big deal. Throw the condom away and get a fresh one. Because the first one was put on the wrong way, it may have air pockets and won’t unroll correctly even if you put it on the right side.

#5 INSERTING JUST THE TIP OF YOUR PENIS

This will not protect you from getting an STI or becoming a father. Your pre-ejaculatory fluid has sperm and the head of your penis can, most certainly, become infected. Whenever you insert your penis, you should have a condom on the entire thing. Whether that orifice is a vagina, anus, mouth, or somewhere else you may creatively think of to insert your penis that may be rife with disease, protect yourself and your partner.

If you or your partner forget to pinch the tip of your condom, pressure from your ejaculation can cause fluid to leak out the sides of the condom. This can lead to those “pesky” children you don’t want. Always pinch the tip; it’s not just there for decoration.

#7 TWO CONDOMS IS NOT BETTER THAN ONE

While doubling-up seems logical, at least it does to the author of this article, it actually increases the likelihood of breaking one or both condoms because of friction. To increase the chances you are actually stepping on the safe-sex bases use just one condom that is new and fits snugly.

If you don’t like latex or are allergic you may go and pick up some natural alternatives such as lambskin. These condoms may have a wide variety of benefits, but “best protection” isn’t one of them. Due to their porous qualities, they don’t offer the same level of protection as latex condoms. Before buying, read widely and extensively. 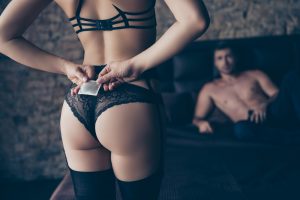 But, why are these changes important?

With the heat of passion upon you, these may seem like a lot of condom changes, but just remember, babies require a LOT of diaper changes, money, and time, and STIs, especially the permanent ones, require a LOT of medication. Rather than having to worry about those scenarios, just grab some new condoms.

#10 FLAVORED CONDOMS ARE NOT YOUR WOMAN’S FRIEND

Flavored condoms are specifically made for oral sex and should only be used in that context. Most, unless specifically stated on the packaging, do not contain spermicide, so won’t kill your sperm. If she wants to use flavored rubber to increase your pleasure when performing oral sex on her, make sure to use a proper condom when sexual intercourse is involved.

#11 YOU STAY INSIDE OF HER POST-ORGASM

While you might be high on that post-sex glow, it’s best to pull out and then snuggle. By not doing so, the condom can fall off and put all your little swimmers in her, exposing both of you to children and possible STIs. Not to mention, going flaccid in her might leave a condom inside of her, which you might not notice. Most people who use condoms are either drunk or adolescents. Adolescents may not have enough experience and inebriation may impair mental clarity so you or she could miss this fact.

Use a lot of lube. Condoms, even if already lubricated, may dry when exposed to air. Keeping them lubricated with water- or silicone-based lubes, not oil-based, is excellent. Vaseline is not recommended, for you or her.

These are just a few tips to have amazing sex and stay free.

The Importance of Amino Acids