No clinical trial documents large sample sets of adult men suffering from eating disorders because they are unlikely to report symptoms or seek treatment. However, community samples and case studies show that adult men are, in fact, affected by eating disorders, even if the root cause of the problem is not always the stereotypical desire to look like a Barbie Doll.

However, the fact that these diagnoses were made in a hospital still suggests that there is a long way to go before people are fully knowledgeable of how eating disorders can impact adult men. Once people completely understand that men too are susceptible, diagnoses will hopefully only occur before these men reach the point of hospitalization.

Some experts theorize that this increase in hospital diagnoses is correlated with a recent increase in steroid use, suggesting that eating disorders are linked to issues with poor body image among adult men. 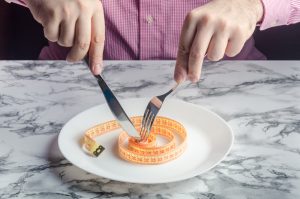 Indeed, studies show that many adult men can suffer from Muscle Dysmorphia. These men are very concerned about their body weight, shape, and muscularity. Men who care about looking excessively muscular face many psychological and physical risks, especially if they are driven to follow extremely strict diet and exercise routines in order to achieve an ideal standard of masculinity. Motivated by the desire to be lean and muscular, these men often go through potentially unhealthy dieting patterns that are aimed at either increasing muscularity, decreasing body fat, or both. Too much of this kind of dieting can lead to an eating disorder.

This desire to stay in good shape is often categorized as a healthy interest, especially among the male population where physical strength and fitness is idealized. Therefore, it is almost impossible for anyone to notice when a man’s food and exercise habits are becoming unnecessarily rigid and detrimental to his health.

Dietitians need to look out for compulsive workout habits, insufficient caloric intake, restrictive dieting rituals, purging rituals, and typical psychological effects of an eating disorder (such as short tempers and flat affects). In order to even bother looking out for signs and symptoms in the first place, they also need to more fully accept that men can be susceptible. However, since symptoms of things like Muscle Dysmorphia are often dismissed as simply a very strong, and often positive, drive to go to the gym, healthcare providers can have trouble spotting the signs and identifying them as symptoms of an eating disorder.

Unfortunately, healthcare providers usually cannot rely on men to report the symptoms by themselves.

Like their healthcare providers, men have trouble realizing that their excessive dieting and workout rituals are actually a problem. However, even when men do know that they are being unhealthy, they still are unlikely to seek help. Men who want to fit within a certain standard of traditional masculinity are less likely to show vulnerability because showing weakness is often a staple of femininity.

Furthermore, eating disorders are a problem commonly associated with young women, so someone trying to be hyper masculine will be very unlikely to admit that they have a stereotypically female issue. These men also have to face the usual stigmatization and shame that comes with seeking treatment for any mental disorder. For these reasons, men who recognize that they are suffering from an eating disorder very rarely report symptoms to their healthcare providers.

Sometimes, however, eating disorders in older men are not about food, muscles, exercise, or hyper masculinity. 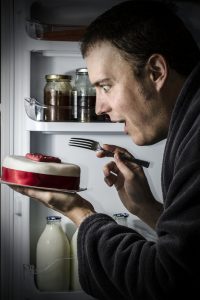 Instead, eating disorders can also be a coping mechanism that men use to deal with something else that is going on in their life. These men get eating disorders that stem from a combination of stressful factors that are unrelated to body image. Common factors often include insufficient attention from friends or family, resentment towards a big life change, economic insecurity, divorce, depression, anger, decreased sense of purpose, suicidality, and other health problems. Additionally, men who already have poor body image may be more easily triggered by stressful life events to embark on unhealthy dieting and exercise habits.

Whatever the cause, the sooner a diagnosis is made, the easier it is for men to accept their condition. Men who accept that they need help still might not necessarily get it, but they are more likely to seek treatment if they can at least admit that they are suffering from an eating disorder. A later diagnosis of an eating disorder is commonly met with resistance and denial because it never occurred to these men that what they were experiencing for years was an eating disorder. They also assume that, since they managed to function for years without treatment, they can continue to do so.

Eating disorders, and mental health disorders in general, are so stigmatized among adult men that healthcare providers sometimes struggle to get men with late eating disorder diagnoses to accept the idea of even processing that they have an eating disorder.

In order to ensure that diagnoses are made early on, men and healthcare providers need to be more aware that eating disorders are not just something that affects teenage girls. After all, anyone can be susceptible to an eating disorder. It may tend to manifest itself differently in adult men than it does for young women, but an eating disorder will still have a negative impact on a man’s health. Anyone who follows restrictive dieting and exercise rituals should be encouraged to, at least, report their symptoms and, hopefully, seek treatment.