Is it Essential for Men & Women to Have Guys and Girls Nights?

Many couples are attached at the hip. They do everything together, and I mean everything.

Many couples are attached to other couples and are unable to hang out with other people. They also do everything together, and I mean everything. From going out to dinner together to getting drinks at a bar together. From shopping for furniture together to attending parties together.

Many couples that display any signs or symptoms of the above diseases do not see the obvious: They can get away and have a guys or girls night if they want to (and they should).

I know, I get it. I’m in a relationship and at times can feel guilty about having a girl’s night out, because it may lead to a drunken me coming home to a sober boyfriend. 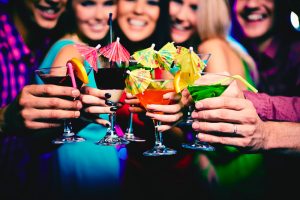 Now I know that doesn’t seem too bad, but it’s pretty bad when I’m throwing up and he’s cleaning it up. But anyways, I see where girls and guys are coming from; A night out can make one or the other in the relationship feel quite guilty. This guilt may stem from a significant other in the relationship not being okay with, or not understanding why, how their hunny would want to go out somewhere without them. And, such scenarios can lead to issues arising within the relationship, including but not limited to tension, unhappiness, limited communication, resentment, pressure, and even depression.

But, did you know that it’s actually healthy to have a night out with the girls or guys once in a while? That’s right, studies have shown that going out with your friends can be a ton of fun, in turn resulting in increased happiness, lengthened life expectancy, and even a boost our immune systems. These benefits occur in both men and women.

Specifically speaking, having a night out with your friends can do the following:

And, when you have a girl’s night or guys night, these benefits are even more beneficial. I say this because I stated above that having a night out with friends can provide these benefits to you but hanging out with the same sex friends you have has the most beneficial effect on you. If I had to take a guess, that would be because women experience a lot of the same stuff and men experience a lot of the same stuff. This allows females to understand females better and males to understand males better, in turn amplifying the above benefits when time is spent with the same sex. Plus, the pressure that is often associated with opposite sex friends is not there, allowing females to be themselves around their friends and allowing males to be themselves around their friends.

I do have a suggestion when it comes to guys and girls’ nights, though. 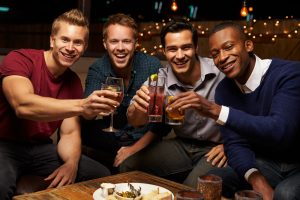 Don’t hang out with friends that will make you resent your significant other. More often than you think, friends will be angry and upset with you because you’re spending so much time with your girl. Don’t bring that kind of negativity into your guys night. Also, don’t allow your girls’ friends to bring that kind of negativity into her life. Make sure the two of you are choosing friends wisely so that they don’t come between you and your relationship.

Also, don’t allow your guys to take you places where your girl would feel uncomfortable. For example, stay away from places like strip joints, house parties, and Vegas (unless she agrees with you going there beforehand or wants to accompany you). And don’t let her friends take her places you’re uncomfortable with. For example, have her stay away from male strip shows, guys’ houses, and beach parties (unless you’re okay with it or you accompany her).

Lesson to learn: Don’t jeopardize your relationship for a night out with friends.

I do have a few bits of advice, too.

Don’t assume that your girl has everything you need, and don’t assume you have everything your girl needs. The two of you cannot survive off of one other, you need to have friends and family members in your lives, too. With that being said, a girls or guys night out once every other week is very healthy (even once a week). Think about it this way, the space that the two of you will have from one another during that night out with friends will ultimately bring you together as a couple. It will promote strength in the relationship.

Embrace your individuality. Like I stated above, the two of you will not be able to offer each other everything all the time. Go out with your friends and get that aspect of fun in your life. For example, she doesn’t like everything you like, and you don’t like everything she likes, but I’m sure some of your friends like the things she doesn’t and vice versa. Go out and get your space from one another. Then, come home and have some wild, crazy, fun sex. You’ll thank me later.

Stretch Marks in Men Over 25