Low Volume Ejaculate? Here’s How to Fix It

Men tend to connect virility, fertility and masculinity with the volume of their semen during ejaculation. It’s not super clear from where this connection emerged, but it’s there. In fact, there’s little science to back up any connection between semen load and sperm count. But that’s not all this is about for a man.

You want to be able to please your partner, and — at least anecdotally — there is a connection for a woman between semen load and pleasure. For the most part, this is about appearances — on your part and hers. She wants to know that she did a good job, and you want to show her that you are masculine and able to knock her up at a moment’s notice. Basically, you want to be able to show that, if you had the opportunity — no protection; no birth control — you could blow a load in her that would get her immediately pregnant. And the size of your load gets that information across right away with no waffling.

There are plenty of stories of women having more pleasure during sex due to the size of the load involved. They’ll look back on the experience as more satisfying, in general, if they feel that they accomplished giving you a bigger orgasm, and the visual evidence of a big orgasm is the size of your load. The size of your load does not necessarily have any bearing on the intensity of your orgasm, but a larger load of ejaculate could extend it’s duration, and gives your brain the cue that you’ve experienced something special. You’ll look back on the experience as more satisfying if the results seem to indicate that this is the case.

There’s even anecdotal evidence to support that larger loads are associated with higher testosterone counts. This might go a long way to explaining why men are so obsessed with their semen. Biology. It’s a more satisfying answer, anyway, than you’re just comparing your own performance to pornography — which, to be frank, just isn’t, generally, going to set many healthy expectations for your sex life. So, please don’t do that.

So, what can you do to get that load large and explosive?

Well, drink more fluids. Specifically, drink more water. Stay away from diuretics like caffeinated drinks, and stay hydrated. It’s obvious if you think about it, so we won’t spend too much time on it, but the more fluid that you are putting into your body, the more that can come out.

The whole eight glasses per day thing is arbitrary and not necessarily possible for everyone. It’s a good place to start, but some people need more, some people need less. It all comes down to genetics and how active you are during the day. There’s no magic number for you or for anyone else. Just increase your intake of water and see where the results point you. Clearer — and less odorous — urine is a good sign. As with anything though, choose moderation. There is such a thing as too much water. Water intoxication is a thing — and it’s deadly. 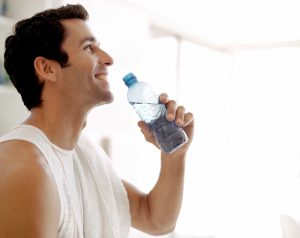 Of course, drinking more water has plenty of other benefits, and some of those can even help you increase your ejaculate. There are statistical correlations between those who drink more water — the whole eight glasses a day thing is kind of bunk but a good place to start — and healthier lifestyles. There are other factors to consider here. People who listen to healthy advice like “drink more water” are more likely to listen to other advice — or at least be more cognizant — regarding healthy choices that they can make.

Healthier choices lead to a healthier you, which, if you’re overweight or obese, could lead to lower semen loads AND lower testosterone AND lower sperm count. So, if your obsession with your ejaculate is connected with your desire to be considered more virile, fertile and masculine with your sexual partners, then hit the gym, make healthier choices and lose some of the weight.

As you probably already know, BMI isn’t the best indicator of your health. Where you stand health-wise is based on genetics. So, clinical terms such as overweight and obese are better for looking at large population samples and mean little when you narrow it down to the individual, but it’s a good place to start if you’re looking to get healthier. Before you start an exercise program or diet, though, you should always speak with your doctor.

The next tip is a simple one — much simpler than changing your lifestyle and get healthier anyway — and it’s avoid the hot tub. There’s a reason that your testes hang around outside of your body. They need to be kept at a lower temperature in order to product healthy loads of sperm. And if you’re trying to get across how healthy and virile you are with a big load, it’s a must. Some data also points to too much time in the hot tub decreasing testosterone production, so there’s that too.

All of the above applies to hot baths in general. I don’t care what Winston Churchill says, sometimes standing is better than sitting. And it applies to those white-tighties too. Trash them. If you want to keep things in control down there and boxers just don’t work for you, go the boxer-brief route at least. Your testicles, and your sperm count and any associated ejaculate, will thank you.

Supplements can help you get there too. Supplements work in different ways for different people, but there are those who have seen beneficial effects from taking them. You just need to do your homework on the ingredients in those supplements, and make sure that the ones that have been shown to actually do the work of increasing virility, libido and sperm counts are all there.

8 Ways To Organize Your Life

5 Best Ways to Assure That You Have...