Reasons Why You Should Never Eat Ketchup

I babysit my niece and nephew a few times a month, just so my brother and sister-in-law can go out and have some time to together. The kids may be difficult at times, but the easiest part of the night is when it’s time to eat dinner. They’re not fussy at all, but they are like every other group of kids out there. When I say that, I mean that they like all the general ‘kids’ foods. Those generally consist of:

So, instead of trying to cook up a chef-like meal on a Friday night after I’ve had a long week between my three jobs, I go with cooking something easy for them.

After I decide what it is I’ll pop in the oven, I start to get the table ready. I set the placemats out and the cutlery (depending on if we need it or not), and then I go for the condiments and drinks.

For some reason, I always instantly take the ketchup out, no matter what meal we’re having. Odd thing is, I never think to ask the kids what condiment they want and I never think to take another one out of the refrigerator. Now, this may have something to do with how my nephew always sucks the ketchup off his food then eats the food, but that’s beside the point.

Now that I’ve told you my little story, I’m about to give you some horrifying news:

You should not have ketchup in your diet.

Seriously, it’s not good for you, and I’m going to tell you exactly why. Check out my reasons below.

A tablespoon of ketchup has more sugar in it than a chocolate chip cookie.

That’s a lot of sugar!

Let’s talk about it in technical terms. Ketchup is sweetened with high-fructose corn syrup, every single time it’s made. That means that ketchup really can’t exist without that ingredient. Though it’s true that high-fructose corn syrup tastes so good, it’s still very unfortunate considering the syrupy goodness is very bad for our bodies.

Basically, one tablespoon of the condiment is about 3.5 grams of sugar, which means that by the time you’re done dipping your French fries in that ketchup, you’ve consumed numerous chocolate chip cookies. Stay away from the ketchup gentlemen.

Ketchup really does overpower everything it touches. 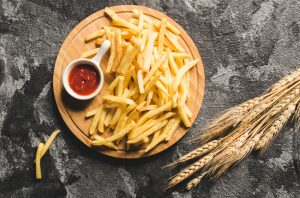 Because ketchup is loaded with sugar, it basically overpowers every other taste in your mouth. For example, when you eat a French fry, your mouth is overwhelmed with the taste of just a little bit of ketchup, which means the taste of the fry is so little, you can hardly tell it’s the main thing you’re eating.

The texture of ketchup really isn’t the greatest.

As far as condiments go, ketchup does not have a good texture. I mean, look at all the other condiments; mayo is nice and creamy, mustard is nice and silky, and so on. This leaves ketchup to be a little gross.

Think about it this way, when was the last time you squeezed ketchup out of a bottle and had a naturally pleasant experience? It doesn’t happen. You get one of two instances to occur when you try to get ketchup out of the bottle:

The smell is a little weird.

I know, you probably have never paid attention to the smell of ketchup, but now you will.

Next time ketchup is in your immediate environment, give it a smell. From that point on, you’ll be able to distinguish when it’s around and trust me when I say, the sense will never disappear from your memory.

Literally. It’s impossible to go somewhere and not see ketchup as an option.

I mean, I go out to dinner with my family, and ketchup is present at the table (whether I’ve ordered a burger or not). Or, the ketchup is already on the plate touching your food! 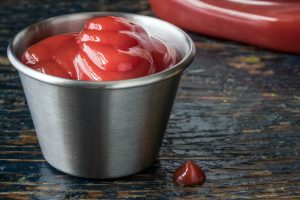 Fast food restaurants have ketchup as an option near all the condiments, and even worse, they automatically put ketchup packets in your to-go orders through the drive-thru.

It’s quite literally never-ending. So, if you want to get away from this substance that’s so bad for you it’s quite difficult. And I understand this may not be a technical reason to get away from ketchup, but believe me when I say, I think it’s a valid reason.

You’re probably wondering why I would even suggest that ketchup is America’s sweetheart, but think about it for a minute. It is the condiments of all condiments. If ever there was a preference, ketchup would rank #1 above all else, and it would come in at a pretty high number in comparison to other condiments. I mean, mayo does come close in the rankings, but nothing else quite does.

Why’s that? Because we use ketchup for everything! We put it on eggs, grilled cheese, hash browns, chicken nuggets, and numerous other food products.

Stay away from ketchup the best you can, guys. You’ll thank me for it in the end.

What You Need to Know About Sexsomnia

Seemingly Healthy Foods That Can Make You Tired

The Importance of Amino Acids

What Are the Healthiest Grains Out There? Are...

Thumbs up or Thumbs Down for Quest Protein...